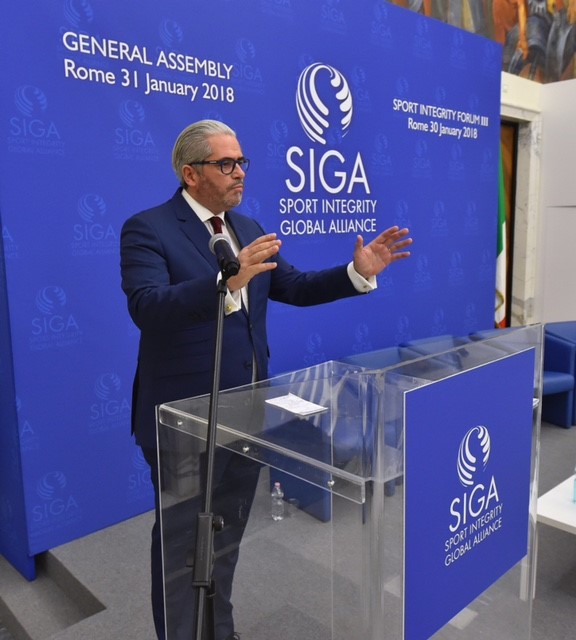 He was first elected as SIGA’s CEO on 31 January 2018, after having spearheaded the inception and coordinated the development of SIGA since November 2015. He was re-elected Global CEO, by unanimity and acclamation, by the SIGA General Assembly on 31 January 2022.

Lawyer by trade, he commenced his career as in 1993. Over the past three decades, he played a leading role in several national and international sports organisations. After six years as Secretary General of the Portuguese Football League, he co-founded and led the Association of European Professional Football Leagues (EPFL or European Leagues) as CEO for a decade. He was also one of the founding fathers and driving forces behind the creation of the World League Association, having been elected its CEO in February 2012.

Similarly, Emanuel played a critical role in the creation of the Sports Rights Owners Coalition (SROC), in 2007, a global forum of over 50 international and national sports bodies and competition organisers, with a particular focus on rights issues.

On 1st of July 2008, Emanuel co-founded the European Social Dialogue in the professional football sector under the auspices of the European Commission, and led the employers’ delegation on behalf of the European Leagues until March 2014.

Emanuel also held a seat on several European Union Expert Groups between 2011 and 2018. In March 2012, he was appointed Ambassador for Sports Ethics by the Government of Portugal.

In addition, Emanuel acted as CEO of ICSS EUROPE & ICSS INSIGHT, between 2014 and 2018. He was also member of the World Economic Forum / PACI’s Advisory Committee and member the OECD’s Task Force on Countering Illicit Trade for several years.

Currently, besides his responsibilities at SIGA, Emanuel Macedo de Medeiros is a member of the Court of Arbitration for Sport in Lausanne, Switzerland. He cooperates with several universities around the world, as guest professor, on areas of sports law, business management and integrity, and is a regular keynote speaker on several high-level international conferences.