The tremendous success of The Sport Integrity Week 2021 can be measured by the participation of 1000+ delegates, 150+ speakers, 100+ organisations, 28 global media partners, and intense echo in the news.

UEFA, IMMAF and FIDE announced during the SIW2021 they will adopt the SIGA Universal Standards on Sport Integrity and go through SIGA Independent Rating and Verification System (SIRVS), following the example of the European Rugby League.

All these factors confirmed the Sport Integrity Week 2021 as the leading Thought Leadership event on this matter, and a must-watch series of debates and Keynotes.

Taking into consideration the importance, impact, and the high-quality of the event, SIGA decided to Re-Run #SIW2021, dividing its content into 10 parts, to be shared in the following SIGA Weekly communications, starting this Friday.

Whilst the tone of speeches was optimistic,  SIGA’s Emanuel Macedo de Medeiros did issue serious alerts: the world needs to move from nice words and good deeds into action. Otherwise, Sport Integrity will never be a reality.

Day one of the Sport Integrity Week had several moments to highlight. Javier Tebas, La Liga President, a critical voice that never fears confrontation to shake the status-quo, made the headlines with a powerful keynote, followed by a vibrant Fireside Chat with SIGA’s Global CEO, Emanuel Macedo de Medeiros.

According to Tebas, conflicts affecting football organisations are serious and hard to solve, which can bring disruption to the industry. He pointed the finger at FIFA President Gianni Infantino for planning bi-annual World Cups, criticized PSG for having financial support from Qatar, and said Real Madrid now have money to buy Mbappé and Haaland. Tebas still pointed that the Court of Arbitration for Sport (CAS) is not independent, as it depends financially on UEFA and FIFA.

Emanuel Macedo de Medeiros, SIGA’s Global CEO started the discussion on the European Super League vs the European Sport Model, saying that Real Madrid, Barcelona, Juventus and other 15 clubs declared war on popular football: “It was an act of aggression led and fueled by greed!”, claiming football must always be “for all, fair, open accessible”, and allow the “underdog to have the ambition of reaching the top.”Giorgio Marchetti Deputy Secretary General & Director of Football, UEFA also opposed to any possible breakaway league: “Discussions and threats started in the 1990’s. They have in common the will to break free from this consolidated sports model, which is built in the interest of sports. When you start considering football a business and put business in front of football, then look at the principles of promotion and relegation and if you don’t want to consider this kind of risk you may be tempted to create a competition for a restricted number of clubs. UEFA will never agree on this.”

“We were one week before approving a private equity project for which we were creating a media company, and private equity would have invested 1,7 Bn Euros… Juventus and Inter decided not to sign this project, so they withdraw, creating a situation that forced us to reconsider this. So, it was more than just the Super League drama… The primacy of the national championships is fundamental. Our system needs stability and the last two years didn’t provide us stability.”

“The only thing that worried me was what would be the reaction of the leagues in Europe. Since that reaction came, I haven’t’ actually been worried. I’ve only been worried because this gives the image that football in Europe is messy and conflictual, while in reality the very opposite is the case. If you take the large picture, you know football in Europe is an omnipresent culture from top to bottom, with a competition that matches with amateur football. This reaffirmed the heart and soul of European football”.

“We’ve been grateful to people who took the protest. This response is explained because we were listening to rumours about the Super League, so people were prepared to respond. On the other side, there was a feeling of betrayal. There was unity in the response against the European Super League”.

Mohamed Hanzab, Founder and Chairman, The ICSS; Vice-Chair, Civil Society, SIGA Council Keynote on “Fighting Corruption in Sport: our Common Achievements” led the way to the second webinar of day 1. He emphasized FIFA’s compensation for the money “stolen by corrupt officials”, and that “organised crime will always attempt to exploit sport”, yet flagged with optimism that “the response of the international community is now tangible”. 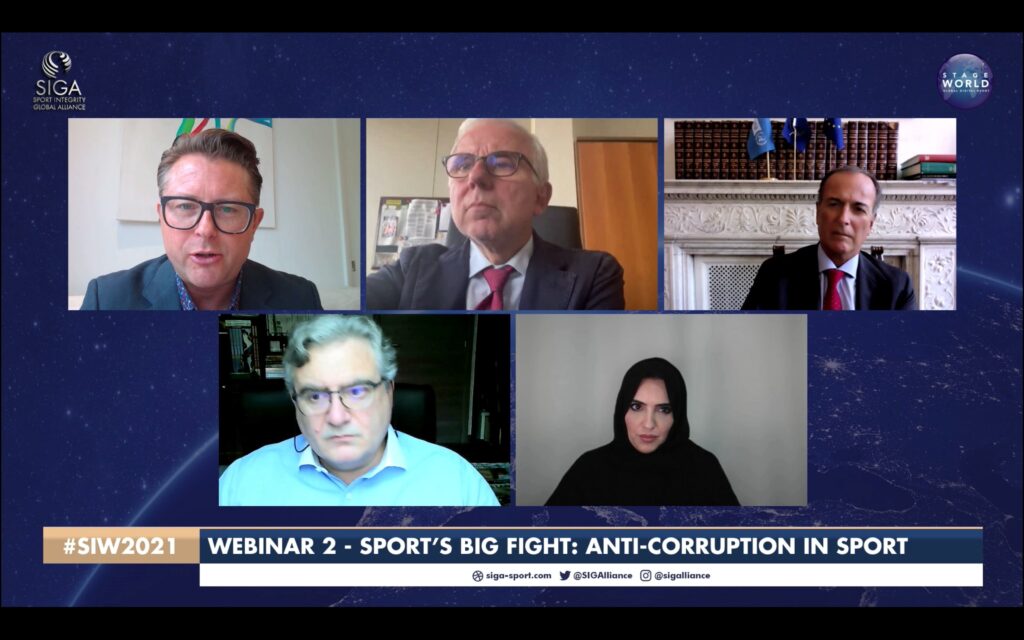 The depth, scale and impact of corruption and criminal infiltration in sport is increasing globally. Facilitated by a permissive climate, fuelled by poor leadership, poor governance and lack of independent scrutiny, the increasing presence of organised crime continues to threat the sporting industry. The consequences of the COVID-19 pandemic have exacerbated problems vulnerabilities on all sectors, providing criminals with even greater opportunities to expand their infiltration. In this session, we explored this troublesome landscape and ascertained how are sports bodies, international organisations, governments and law enforcement reacting, and whether they are doing enough.

“All Sport is now more than ever vulnerable to corruption because it mobilises huge amounts of money. We should take our attention to explore the sources. What is the nature of the corruption, and criminality around sports? From infiltrations to intimidations of clubs, not only small clubs are victims of intimidation. Under this, youth is the first victim, so education is key!”

“In Naples sometimes sport champions are involved with organised crime. You may remember Diego Armando Maradona, and Balotelli being pictured with criminal leaders. I don’t know if this is corruption, but sport is a machine to build consensus. Connections have been detected and sometimes this is used to produce political consensus.”

“Corruption undermines and has a negative impact on society. The effects are widespread, some of these are rather obvious like poverty, impunity, partial justice, human rights violations… Corruption in Sport is similar to the one found in other sectors, so sport organisations must cooperate with criminal justice authorities, with a systematic exchange of information.”

“The starting point for EU is that corruption and organized crime are tackled as a general phenomenon, and not much considered in a specific sector, like Sport. In 2007 EU started recognising the importance of sport and criminal activities in this area. The white paper then admitted threats to sport. Complexity of the organization and insufficient transparency”

SIGA is the world´s largest coalition in the field of sport´s governance and integrity. Supported by more than 100 international multi-industry supporters, SIGA is an independent and neutral organisation whose mission is to bring about meaningful reforms and enhance the integrity of all sports through a set of universal standards operated by an independent and neutral body. SIGA is the only organisation to bring together sport, governments, academia, international organisations, sponsors, business, rights holders, NGOs and professional services companies, from every region in the world, around a common cause of fostering greater integrity throughout sport.