“A Winning Mindset: Why be average when you can be alpha?”. The title for episode 6 of Women on Wednesday couldn’t possibly be more adequate to the outcome of the interaction of four women leaders in Sport.

Katie Simmonds, SIGA Global COO, produced and hosted another monthly show aimed at empowering female leaders in the industry and had four inspiring guests:  all of them making clear that women are breaking barriers.

While speaking of the sexual misconduct scandal that shook US National Women’s Soccer League, leading to Commissioner Lisa Baird’s resignation, Lauren Chamberlain stated that it is unacceptable that sports organisations don’t have strict policies on integrity.

“One thing I’ve seen a lot when these things happen is that there was not something in place to protect the athletes. A lot of time, they only do backtracking… Now the NWSL wants to have a policy; now they want to better implement their rules. Backtracking can’t happen anymore”, flagged the recently elected softball Women’s Professional Fastpitch League Commissioner. Showing full alignment with SIGA’s position on Sport Integrity – urging governing bodies to adopt and implement Universal Standards to ensure clean sport – Lauren’s strong words showed WPF is on the way to safeguard it’s athletes: “Luckily with WPF we are in the early stages of developing those procedures, so when something happens, we can have a swift action: ‘you’re out, you’re gone’. We won’t look for ways to bend the rules. Those days are long gone. Women are speaking! Having those policies upfront and operating is vital to integrity. It is interesting that as I go towards the top, things get tricky when more money gets involved. But it shouldn’t be tricky between right and wrong, and that depends on leadership”. 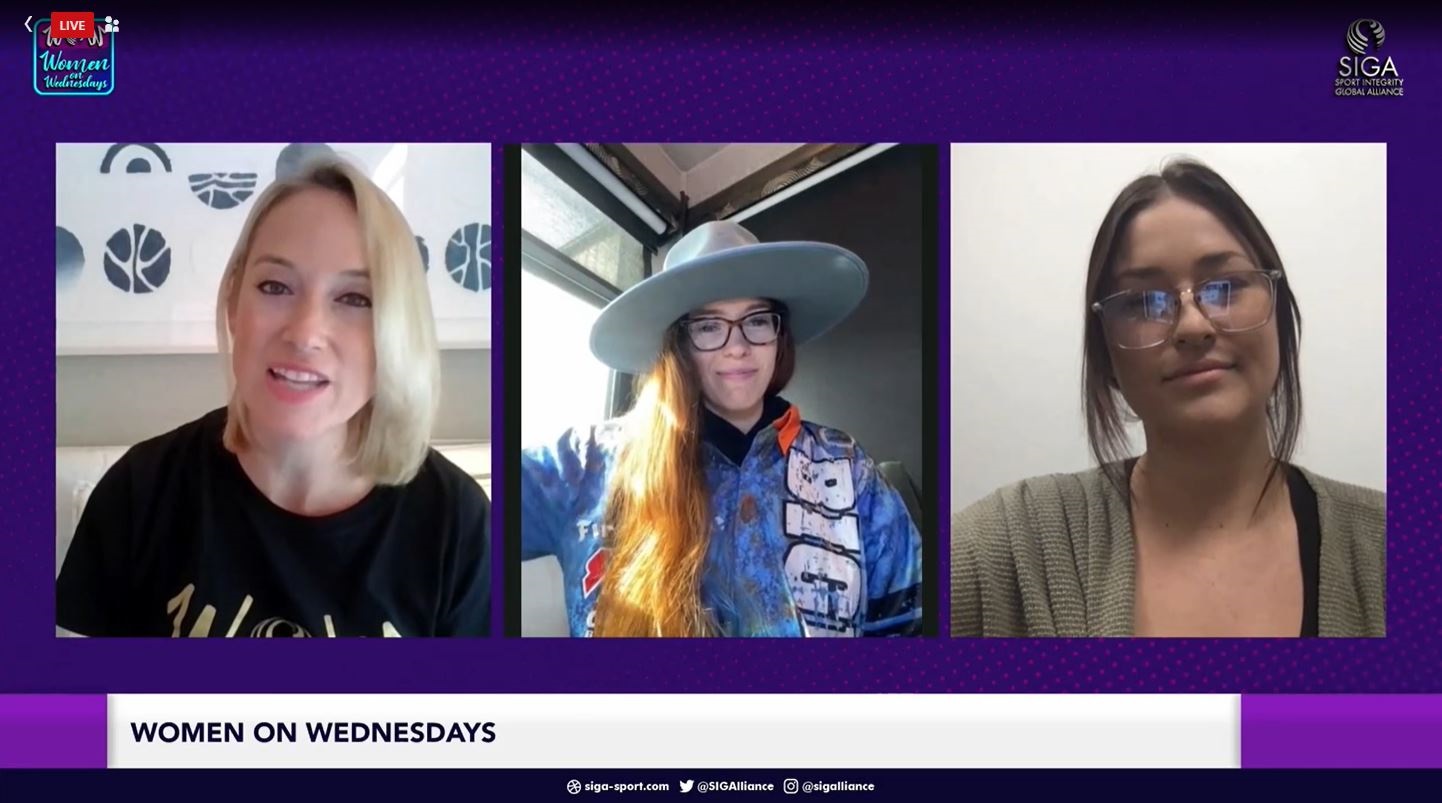 Also aligned with SIGA positioning regarding Sport Integrity, Radmila Turner (former basketball player, currently FIBA’s Head of National Federation’s & Sport, Youth & Antidoping) considered abuses can only be fought with Integrity Programmes, and emphasised FIBA already does it with its Time Out initiative. Former Bulgarian champion, remembered these issues can affect young men and women. Should a sport leader resign after a scandal like this? Radmila says it depends on each one: “What do you value more? The career or the values? The right choice is the second, the integrity of organisations”.

Asked by WoW audience about cheerleaders in basketball matches – a hot topic in Sport – Radmila admitted that sometimes the dance becomes a bit provocative, but ensured that is not the point of it, and that all FIBA work is done taking into consideration the entertainment from a spectator perspective. She added there are many other events in each match, all related to physical activities. 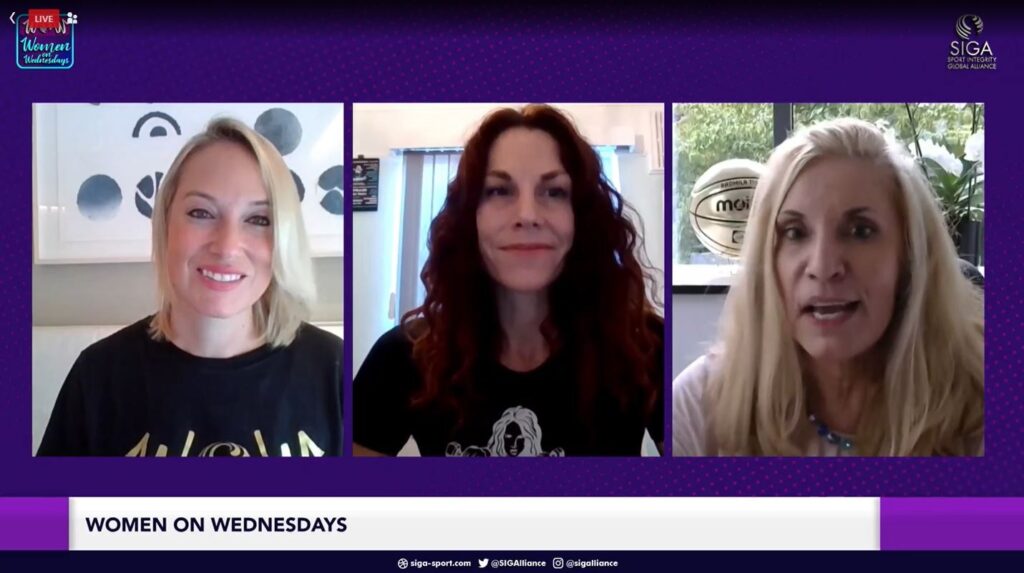 Is the world divided into men’s and women’s jobs, tasks, duties or even hobbies? No, is the short answer, and sport is proving it daily. WoW’s guest Rebecca Schnell is one great example of this: she is a Hot Wheels Monster Truck Driver, and competes with men, often twice her size…

She started her career as a nurse, then married a Monster Truck Driver, started crewing with him and suddenly she was driving her own truck. How? She explained:  “I got tired of working on all of his broken parts. I thought if I could do it, I surely can drive too, and be an inspiration to all men and women. Physically I am tiny, and have to struggle to prevent injury. It was a shock to some men. ‘This chick is driving!?’ Older men had never seen a woman driving a monster truck… It is funny that I made my debut in the UK, and had no negative remarks, only enthusiasm from all boys and girls.”

Answering to a question made by Sarah Castro, Diario As Colombia director, Claire Johnson, CEO at The Naked Woman, gave her opinion on the biggest challenge facing women’s leadership in sports:

“Making sure there are enough opportunities and it is accessible for women! I am currently involved in motorsport, where the percentage of women is small. I am working with different organisations to educate younger women to set a career pathway, so they can see the opportunities that are open to them. That is the biggest challenge, and if we can do that we will see more women in leading roles”.

Haresh Deol, editor at Twentytwo13, from Malaysia, SIGA media partner, asked if “young girls really need icons to inspire them, or just plenty of support from their parents”. Radmila Turner showed strong ideas about it: “they need both. They need to see what it looks like to follow a dream. When making choices in life, everyone needs examples. However, we all know that without the parents’ support it is tough for girls to play sport”.

MALE CHAMPION OF THE MONTH 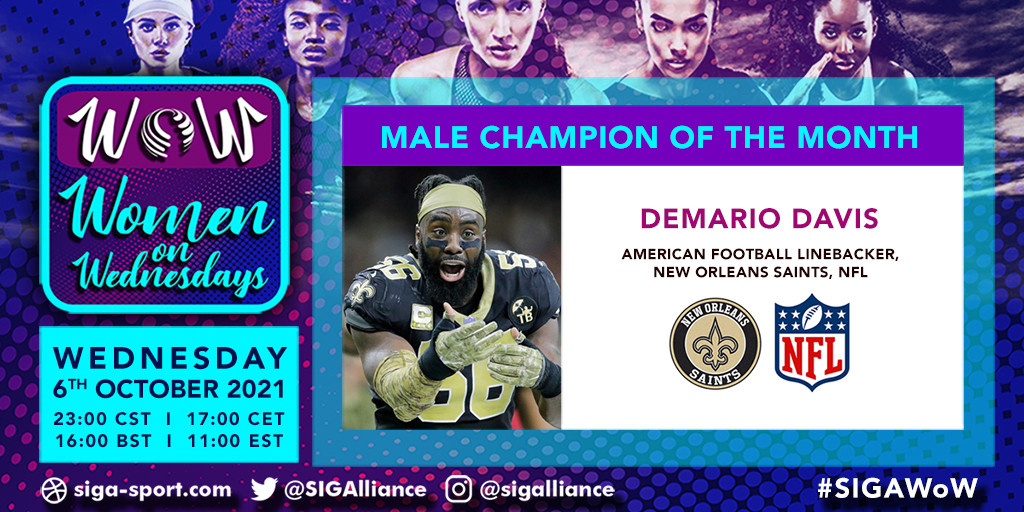 Angela LaChica president and CEO at LaChica Sports & Entertainment had the mission to nominate the male champion of the month, and the award was bestowed to Demario Davis, NFL linebacker, playing for the New Orleans Saints:

“He is a tireless humanitarian who constantly uses his platform for change, impacting citizens around the world. He is a huge advocate and champion for women in the sports industry behind the scenes. He surrounds himself with women leaders who are empowered with decision rights. We need more men like Demario leading the way on and off the field, and we thank him for all the work to empower women around the globe.”

Save the Date: 7th Episode of #SIGAWoW Wednesday 3 November 2021!

SIGA is the world´s largest coalition in the field of sport´s governance and integrity. Supported by more than 100 international multi-industry supporters, SIGA is an independent and neutral organisation whose mission is to bring about meaningful reforms and enhance the integrity of all sports through a set of universal standards operated by an independent and neutral body. SIGA is the only organisation to bring together sport, governments, academia, international organisations, sponsors, business, rights holders, NGOs and professional services companies, from every region in the world, around a common cause of fostering greater integrity throughout sport.